At the beginning of the year, I made a promise that book addicts around the world will find familiar: I vowed to not buy any books until I’d read the ones already waiting on my shelves.

The fact of the matter is, I’m fairly certain I acquired at least twenty more books this year. At least. And by “least,” I mean “the highest amount I’m willing to publish on a blog that my husband sometimes reads.”

At any rate, November was especially good to me; I received an ARC from MacMillan; won two books in an Instagram giveaway; and was made aware of the existence of BookOutlet thanks to some beloved Bookstagram buddies, just in time for Black Friday. If you haven’t had the joy of perusing this site yet, give it a look and let your little bookish heart soar at the overwhelming volume of new editions priced at wallet-friendly prices. Like, less-than-five-dollars friendly. Yeah. I know. Take a moment to let that soak in.

This month when my hoard arrived in the mail, I actually shrieked. I was so excited my hands started to quiver a bit with anticipation. I’ve never been foolish enough to try any drugs stronger than NyQuil and Tylenol PM, but I’m willing to bet my thrill rivaled that of a coke addict about to score his next hit. (Too far?)

Without further ado, take a look at these 11 finds I added to my shelf this month, courtesy of my Black Friday BookOutlet spree (for a mere forty-one dollars and twelve cents!):

A Good Country, published in 2017, is a fiction novel touted as “truly brave” and “an important novel for this moment in our history.” (Percival Everett) A bit from the novel’s synopsis: Laguna Beach, California, 2011. Reza Courdee, a sixteen-year-old straight-A student and chemistry whiz, takes his first hit of pot. In as long as it takes to inhale and exhale, he is transformed from the high-achieving son of Iranian immigrants into a happy-go-lucky stoner. He loses his virginity, takes up surfing, and sneaks away to all-night raves. For the first time, Reza — now Rez — feels like an American teen. Life is smooth; even lying to his strict parents comes easily. . . . We are left with . . . a lingering question that applies to all modern souls: Do we decide how to live, or is our life decided for us? 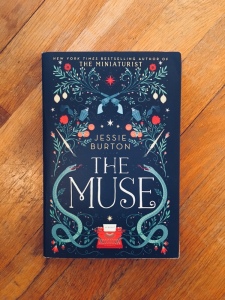 From the author of The Miniaturist (which I have yet to read, but have had my eye on for some time) comes The Muse, published in 2016. This work of fiction follows two women in different countries and time periods: Odelle Bastien, living in London in 1967; and Olive Schloss, dwelling in Spain in 1936. Odelle is an immigrant working at an art gallery when she discovers a high-interest painting by an artist who died under mysterious circumstances. Decades earlier, Olive moves with her parents to the southern coast of Spain where she grows close to a housekeeper and a painter. The two women are united across the decades by a tie that even they are unaware of.

This purchase was strictly made on cover appeal. The artwork is absolutely spellbinding, so I’m trusting the work will be, too. From the inside cover: Every year, the people of the Protectorate leave a baby as an offering to the witch who lives in the forest. They hope this sacrifice will keep her from terrorizing their town. But the witch in the Forest, Xan, is kind. She shares her home with a wise Swamp Monster and Perfectly Tiny Dragon. Xan rescues the children and delivers them to welcoming families on the other side of the forest, nourishing the babies with starlight on the journey. One year, Xan accidentally feeds a baby moonlight instead of starlight, filling the ordinary child with extraordinary magic. . . . Sounds perfectly fantastic, doesn’t it? I’m so excited to jump into this modern-day fairy tale! 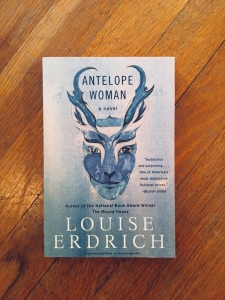 Published in 1998, Antelope Woman is one of many titles by renowned author Louise Erdrich. Although I didn’t love her most recent novel (Future Home of the Living God), I’m willing to give Erdrich another try, as I’ve heard great things about her Native-infused literature. From the back cover, When Klaus Shawano abducts Sweetheart Calico, the seductive Indian woman who has stolen his heart, and takes her far from her native Montana plains to his own Minneapolis home, he cannot begin to imagine the eventual ramifications his brazen act will entail. Shawano’s mysterious Antelope Woman has utterly mesmerized him — and soon proves to be a bewitching agent of chaos whose effect on others is disturbing, and irresistible, as she alters the shape of things around her and the shape of things to come. 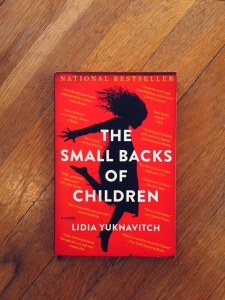 Published in 2015, this title comes with three full, front-and-back pages of praise. I’m going to go out on a limb here and say this one might be a hit. The Small Backs of Children is the story of a photographer who captured a striking image of a young girl in a village stricken by war, and an attempt by a community of artists to locate the child featured in the world-famous photograph and rescue her, bringing her safely to the United States. As you can imagine, conflict abounds in this national bestseller. 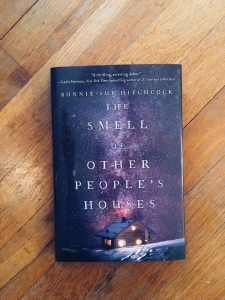 Alright, I’ll admit it again: I was drawn to this one by its magical cover and the absolutely curious title, The Smell of Other People’s Houses. You got me, Hitchcock; bravo. This work of fiction, published in 2016, is set in Alaska and features four individuals: Ruth, Dora, Alyce, and Hank. From the publisher: “Growing up in Alaska in the 1970s isn’t like growing up anywhere else: Don’t think life is going to be easy. Know your place. And never talk about yourself. Four vivid voices tell intertwining stories of hardship, tragedy, wild luck, and salvation.” I’m all about those tragedy-and-salvation novels, friends, and I can’t wait to crack the spine on this short but promising read.

Okay, I might be most excited about this discovery — Carrying Albert Home, by Homer Hickam. Hickam is the author of Rocket Boys, a beautiful and hopeful memoir that was made into the 1999 movie drama October Sky, both of which I absolutely freaking love. For those familiar with Hickam’s memoir, this “somewhat true story” will feature some familiar characters: Elsie and Homer Hickam, Sr. This novel promises historical nuggets, family legends, humor, and sorrow as Hickam weaves together the tale of his parents’ courtship and an alligator named Albert.

Published in 2016, Everyone Brave is Forgiven comes to readers from Chris Cleave, author of Little Bee. Dubbed “both searing and timeless” by the Seattle Times, this novel takes place in London in 1939 — in the heart of World War II. Set in London during the years of 1939-1942, when citizens had slim hope of survival, much less victory, Everyone Brave is Forgiven features little-known history and a perfect wartime love story inspired by the real-life love letters between Chris Cleave’s grandparents. Um, a love story set during the 40s based on actual love letters? Count me in, folks. 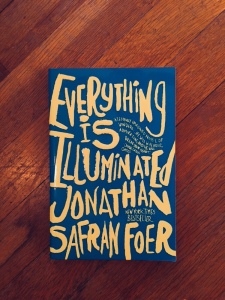 Foer stole my heart with Extremely Loud and Incredibly Close; which is why I jumped at the $2 opportunity to purchase this 2002 novel with the following synopsis: With only a yellowing photograph in hand, a young man — also named Jonathan Safran Foer — sets out to find the woman who may or may not have saved his grandfather from the Nazis. Accompanied by an old man haunted by memories of the war; an amorous dog named Sammy Davis, Junior, Junior; and the unforgettable Alex, a young Ukranian translator who speaks in a sublimely butchered English, Jonathan is led on a quixotic journey over a devastated landscape and into an unexpected past. I feel all the feels coming on. 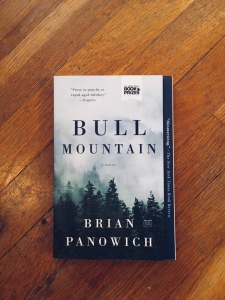 I’m a sucker for covers with photographs of fog. If I ever write a novel, I am going to try my damnedest to ensure the cover features fog. Is there anything more alluring or enticing? This 2015 debut novel by firefighter Brian Panowich (okay, maybe that’s smoke on the cover, instead of fog?) promises plenty of drama and conflict: Clayton Burroughs comes from a long line of outlaws. For generations, the Burroughs clan has made their home on Bull Mountain in North Georgia, running shine, pot, and meth over six state lines, virtually untouched by the rule of law. To distance himself from his family’s criminal empire, Clayton took the job of sheriff in a neighboring community to keep what peace he can. But when a federal agent with the Bureau of Alcohol, Tobacco, and Firearms shows up at Clayton’s office with a plan to shut down the mountain, his hidden agenda will pit brother against brother, test loyalties, and could lead Clayton down a path to self-distruction. This synopsis — coupled with Esquire‘s blurb “Prose as punch as rapid-aged whiskey” — was enough to draw me in. And at $3.72, I couldn’t click “add to cart” fast enough. 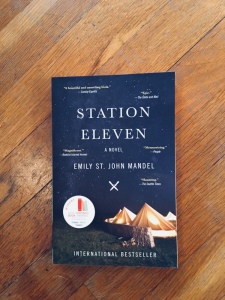 Last but not least, this 2014 science fiction/post-apocalyptic release has been all over the Bookstagram/Litsy communities lately and I couldn’t resist adding the title to my cart. The book won the 2015 Toronto Book Awards and was a finalist for the National Book Award, Pen/Faulkner Award, and the Sunburst Award. Twist my arm, why don’tcha? From the cover: One snowy night Arthur Leander, a famous Hollywood actor, dies onstage during a production of King Lear. Hours later, the world as we know it begins to dissolve. Moving back and forth in time — from Arthur’s early days as a film start to twenty years int he future, he a theatre troupe known as the Traveling Symphony roams the wasteland of what remains — this suspenseful, elegiac, spellbinding novel charts the strange twists of fate that connect five people: Arthur, the man who tried to save him, Arthur’s first wife, his oldest friend, and a young actress with the Traveling Symphony caught int he crosshairs of a dangerous self-proclaimed prophet.

I’m absolutely stoked to read each of these works in 2018, among dozens of other titles, undoubtedly. What’s a book you’re eager to read in 2018? Tell me in the comments below!