We’ve all been asked the hypothetical question at some point in our lives: If you could have dinner with any 5 people, dead or alive . . . who? and why?

My five changes frequently — sometimes Matthew McConaughey’s on the list, sometimes he’s replaced by John Krasinski (they seem so down-to-earth — how could I not?). My mama is always there, though I alternate between Jodi Picoult and J.K. Rowling on a pretty regular basis. (I’m trembling at the mere thought of being graced by their presence.) Stephen King — duh. Edgar Allan Poe — ditto.

And what would I do if, by some stroke of fortune, we all ended up actually sharing a meal and a few bottles of champ together? Um. Well.

In Rebecca Serle’s debut novel, The Dinner List, this is exactly the predicament Sabrina finds herself in when she arrives at her restaurant birthday-dinner date with her best friend: seated around the table alongside her best friend, Jessica, Sabrina sees her father, her ex-lover, her former philosophy professor, and — gulp! — Audrey-freaking-Hepburn. It’s an initially unfortunate-seeming mishmash of individuals: Audrey’s clearly out of place with the other mere mortals, and Sabrina needs some convincing that the situation is real. But once the cork is popped and appetizers ordered, the table finds itself thrown into the inevitable: serious conversation. Sabrina is forced to confront regrets, frustrations, anxieties, and losses from previous years; not the least of which is her failed relationship with Tobias, the man she’s long considered the love of her life. 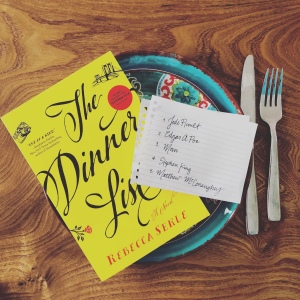 A great deal of this book worked for me: I enjoyed the premise, the storyline trotted along at a quick clip, characters were largely a fun and supportive mix that worked for the scenario. To be honest, I picked this book up thinking it would be a “fluff” read — a little bit of romance, some drama, basic chick-lit — but by the time I was done, I was quite surprised to have had so many feelings while I read. And introspective thoughts. For that, I applaud Serle — she managed to compose a narrative that is seemingly simple and predominantly light, but not without depth.

And while the timeline is all-too-familiar in today’s market — back and forth, past and present — I found it a successful formatting for The Dinner List, in which the “present” portions are noted with the time on the clock (hence creating a countdown vibe that enticed me to stay up until 1 in the morning on a work night) and the flashbacks provide a more adequate portrait of Sabrina and Tobias’s shared history.

In a sense, the novel includes a touch of romance — after all, it is Sabrina and Tobias’s love story — but don’t head into this one expecting anything steamy, sexy, or happy-go-lucky. The pair’s history is fraught with frustrating turns of fate and unfortunate circumstances. But the book is so much more than this love story, too — it’s a tale of redemption, forgiveness, and really, the concept of fate and how our every choice alters fate on a minute-by-minute basis.

My one gripe: Audrey. I know, I know — she’s an icon. She deserved to have a seat at that table, and on several occasions, I felt that seat was well-filled. HOWEVER, for the most part, it seemed Serle became a bit heavy-handed with Audrey’s portions; instead of being another player at the table with a bit of starshine, she became a history lesson for readers and that became a bit tedious. More often than not, it seemed Serle needed to justify her inclusion of Audrey with reasons for Sabrina’s (aka Serle’s?) obsession with the actress, and it wound up feeling like a biography-within-a-novel . . . which took me right out of the story on more than one circumstance.

That being said, the novel is a largely compelling read with an intriguing and witty storyline. I’d recommend it to just about anyone — but I’ll warn you to be wary of the f-word: The Dinner List goes above and beyond fun. It’s downright decadent.

Thank you to Flatiron Books for sharing a review copy of this title with me! All opinions are my own and were in no way impacted by the publisher.